The Power and the Glory

In the exhibition The Power and the Glory we get a glimpse of  how the Vasa looked in colour as she sailed out in Stockholm harbour.

The Vasa sculptures, like her hull, are a stained dark brown colour today from their time at the bottom of the sea; and also from conservation. Research shows a different picture of the ship. The Vasa was an explosion of colour.

After twelve years of examination, approximately 1200 microscopic fragments of colour have been analysed and interpreted. About fifteen key pieces of sculpture have been reconstructed to show how they were originally painted.

The exhibition also contains a slide show on eight large screens which places the sculptures from the Vasa in their historical context. The story begins with Bronze Age rock carvings and develops with the ships of the great seafaring nations in northern Europe, Spain, England and Holland – each trying to overshadow the other.

In the 17th century ship decoration reached its greatest height. For Sweden, sparsely populated and unknown, and for Gustav II Adolf with his ambitions for a great empire, it was important to show that we were as mighty as other countries. The Vasa's sculptures would demonstrate a powerful nation with strong political and military resources. 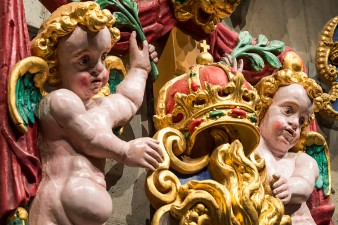 The Sculptures of Vasa

The Sculptures of Vasa

Painted in bright colours and with several hundred sculptures, Vasa was a colossal work of art that would make the rest of Europe admire and fear King Gustav II Adolf. An advertising campaign from seventeenth-century Sweden with an enormous budget.

Gustav II Adolf (1594-1632) was the son of King Karl IX and Kristina of Holstein-Gottorp. His grandfather was Gustav I, or Gustav Vasa as he is often called today, the first of the Vasa dynasty.